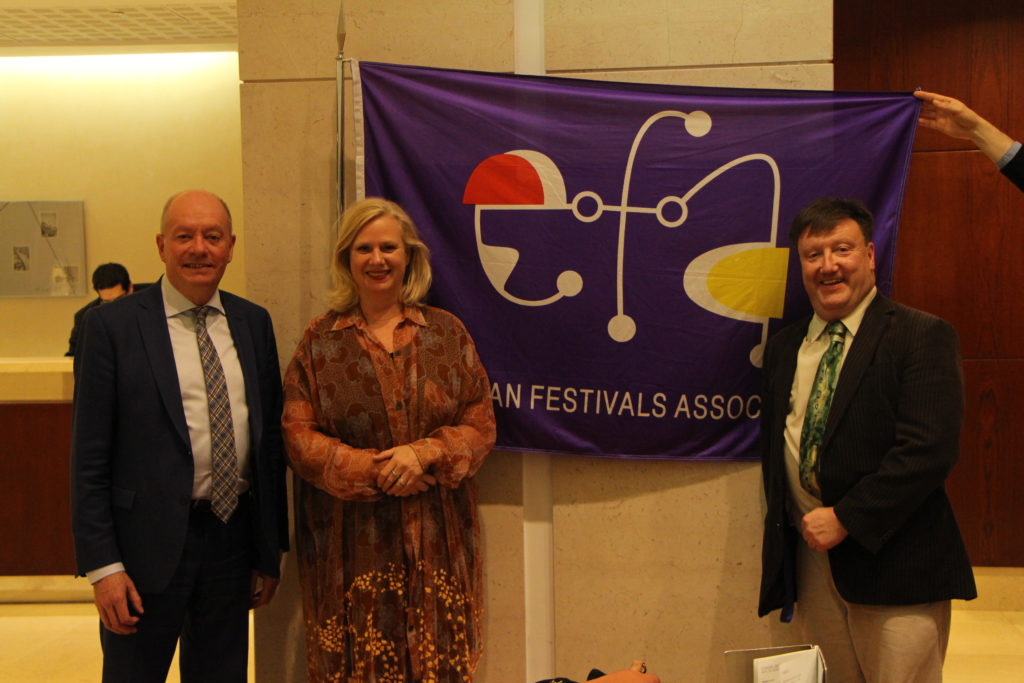 The Irish Association were represented alongside their other 14 Collective and National Association Partners and some 200 festival producers in the capital of Portugal for three days under a European Union funded Annual Conference.
The Conference and Summit was hosted by the Estorial Festival. The Europe for Festival, Festivals For Europe Jury led by Sr. Johnathan Mils updated delegates on the growing success of the European Festival Finder Website tool which has some 2000 Festivals using it – alongside some 41 Irish Arts Festivals.
Registration to use the Finder is Free and will remain open to the end of the year. The Festival
Labels & Awards process is closed, and only 13 Irish Festivals applied alongside the other 700 . The
Jury will be shortlisting in early summer and the European Festival Awards will be announced in Brussels in late September.

The 27 National/ Regional Hubs who act as contact points for the project and process (of which AOIFE is one for Ireland) are hopeful after presentations on the new phase of the project. It is now anticipated that after the new Parliament being elected in May and the new Commission being appointed in November that a formal call will be made to commence the next format of the project.
Three days of one to ones, roundtables, debates, presentations and facilitated discussions including one from former Cork Midsummer Arts Festival Director and distinguished Alumni of the EFA Atelier programme, Tom Creed, left delegates exhausted.
With some chat about Brexit and collaborations a lot of delegates were interested in Ireland’s capacity for partnering EU colleagues with festival projects. Tourism and City Arts Marketing was a significant theme with lots of City and Regional Tourism Agencies offering insights into how they are trying to focus on sustainable tourism for cities and
regions using festivals and cultural events.

All eyes turn to Galway for the Conference in April 2020 as part of the European City of Culture celebrations, when AOIFE will be the National Host for the fourth edition of the European Arts Festivals Summit.